The Stottlemyre’s, originally from Eastern Washington, have always had a passion for the outdoors. Hunting and Pacific Northwest fishing was just a way of life for this family. Baseball was a full-time job that took the family to New York City for the 7 months. The family traveled back and forth every year from hunting and fishing camps to Yankee Stadium. One thing that never wavered, was they did it together as a family. Today, that togetherness still shines through in the Stottlemyre’s fishing business.

As a young boy, Mel Jr. fished rivers and lakes throughout Oregon, Washington, and Idaho. Off-days during the baseball season were spent back east on lakes and streams, catching bass and trout. The Cascade Mountains was home to the elk and deer they hunted. Wall tents were their cabin in the woods for a better part of 6 weeks. Steelhead fishing took them to the John Day, Snake, Cowlitz, Columbia, and Clearwater River. Late winter ice fishing on Potholes Reservoir and Moses Lake was on the menu.

Baseball was a huge part of the Stottlemyre’s lives and still is today. Mel Sr. pitched for the New York Yankees from 1964-1975 and later become the pitching coach during the dynasty years winning 4 World Series. Mel Jr, followed in dad’s footsteps and pitched for the Kansas City Royals and presently the pitching coach for the Miami Marlins. Mel’s younger Brother Todd, had a very distinguished baseball career, pitching 12 years in the major leagues and winning 3 World Championships.

Baseball and the outdoors has kept the family very busy, but they always found time for one another. Some of Mel Jr’s fondest memories were growing up in Yankee Stadium with his dad and brothers. Fishing with their boyhood idols Mickey Mantle and Thurmon Munson was the coolest.

Today, the Stottlemyre’s fishing operation is in Lewiston Idaho. Their love for the outdoors and passion for sport fishing is exemplified through each fishing adventure. We look forward to sharing our experiences with you!

Lisa Stottlemyre a lot of hats in our family business and is the charming lady with the southern accent that handles all our phone bookings. Lisa will be happy to help with any travel or lodging arrangements and make your booking process a smoother one. She is also a great cook and responsible for the yummy brownies and potato salad on Mel Jr’s trips. Lisa keeps in touch with all the guides for updated reports and availability. She also is our event coordinator for our charity fishing events.

She is also a fisherwoman, growing up in Georgia she spent a lot of time with her dad catching catfish and brim with her cane pole. After marrying into the Stottlemyre’s fishing family she got her taste of steelhead fishing. She still has the special pic of her 1st steelhead caught on the John Day river while fishing with Mel Sr and Jr. Well if that’s not enough then we have to mention that she’s happy to shuttle folks from the airport to their lodging arrangements.

As a young girl being raised in a baseball family and spending time in the outdoors of the Northwest, Maleigha wasn’t your typical girly girl. Maleigha’s first fishing experience came while on a camping trip to the Salmon River, fishing for small mouth bass. She caught her first trout in a lake around the Blue Mountains at age 3. While brothers Colton and Blaise enjoy more of fishing rivers, Maleigha preferred mountain lakes. These days you can find her hiking trails around the Portland area where she moved after graduating from Washington State University with a sports management degree. Maleigha spent 4 years working in professional baseball and is currently employed by Nike. She also helps with the marketing side of our fishing business.

At the young age of 16, Colton and brother Blaise have experienced a lot of what his dad, uncle, and grandfather experienced growing up in a baseball family and getting to fish in the off season. Colton is his dad’s number one deckhand and a very good host on our fishing adventures. Colton’s first fishing trip took him down the Madison, fly-fishing with his Dad at the ripe old age of 3. Colton’s most memorable fishing trip was with his grandpa, dad, and brother when he caught his 22-pound Clearwater steelhead. Colt is a natural when it comes to side drifting and is a great coach for our clients as well netting fish. Pitching is also in Colton’s genes as when he’s not fishing you can find him on the mound.

Blaise better know as Beezy can also be seen netting client’s fish in dad’s boat. Blaise spends a lot of time with dad compiling video footage from our trips and assisting in producing the final cuts. Blaise’s favorite fish to catch is small mouth bass but it also an excellent steelhead fishermen. Not many kids can say they’ve caught an 18-pound steelhead by the ripe old age of seven. Blaise’s fondest fishery memory is the three-day jet boat trip up Hells Canyon, catching a couple hundred bass with his family. Beezy loves to throw crank baits and jigs with light line tackle. Blaise, like his brother has baseball in his blood. Both boys enjoy being on the field as much as they do on the river. 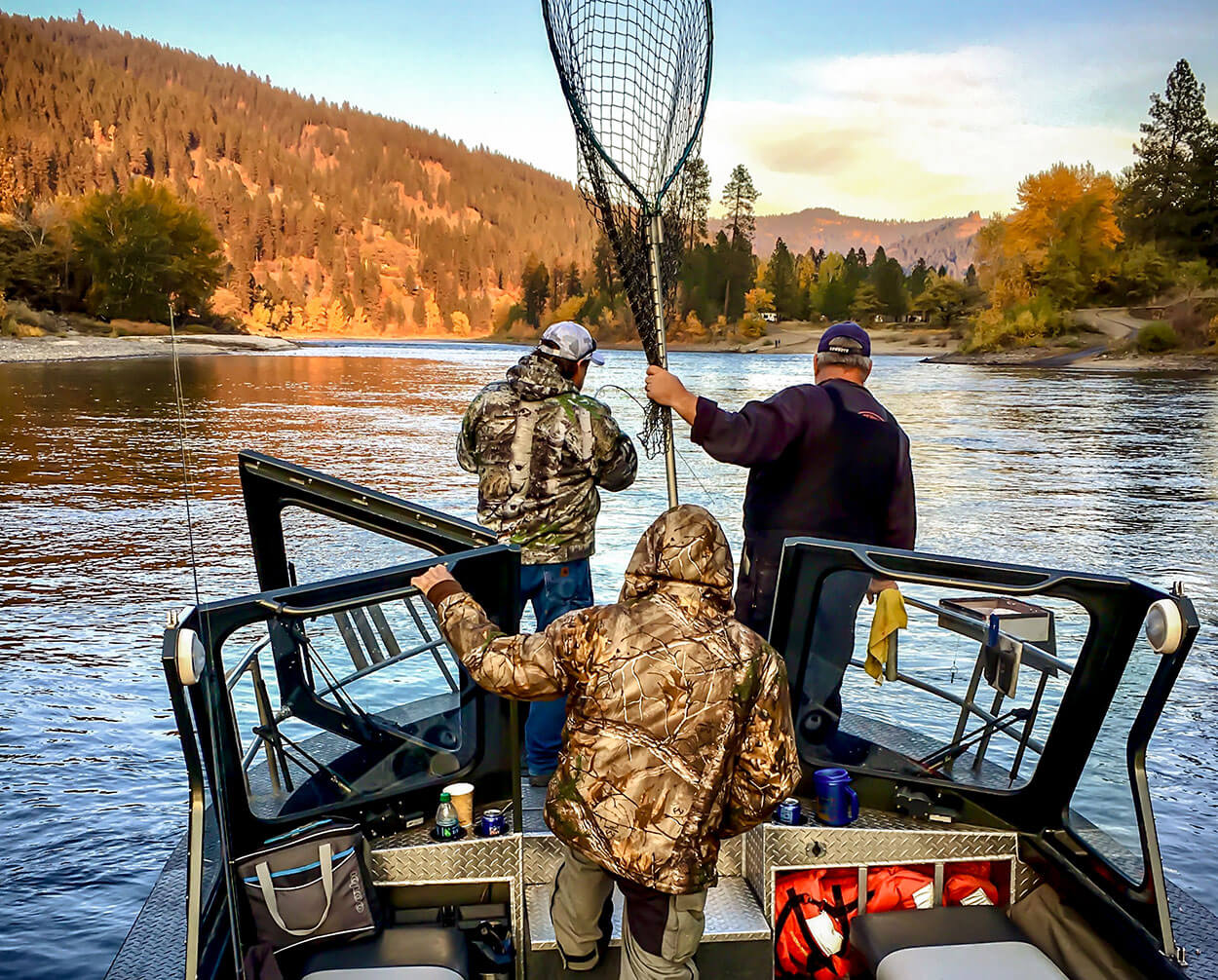